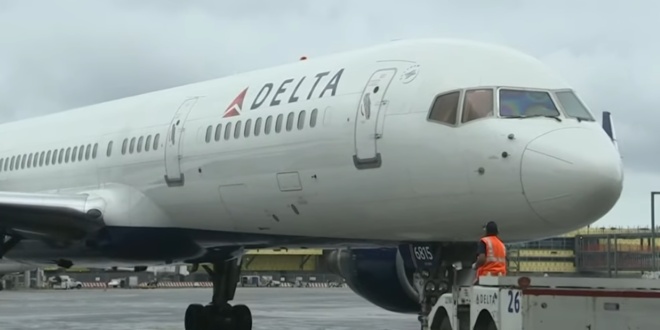 The FBI responded Friday after a Delta flight from Los Angeles to Nashville was diverted to Albuquerque after a passenger approached the cabin in a way that forced flight attendants to act.

Delta said Flight 386 landed in Albuquerque without incident and the passenger was removed by law enforcement.

According to Delta, the crew and passengers of Flight 386 “assisted in detaining an unruly passenger as the flight diverted to Albuquerque. The aircraft landed without incident and the passenger was removed by law enforcement.”

Officials at the Sunport say there was a level four incident on the plane. They say typically means someone tried to break into the cockpit.

Sunport officials say the passenger was not able to actually get in the cockpit and passenger video shows the man being restrained by flight attendants and other passengers.

Witnesses onboard say a man was yelling ‘stop the plane’ and went for the cockpit. The FBI is now investigating. The man’s identity has not been released.

Delta said a flight will take the remaining passengers from Albuquerque to Nashville, arriving about five hours behind schedule. The Boeing 737 had 162 passengers and six crew members onboard

The incident happened as the Federal Aviation Administration is in the midst of a crackdown on unruly behavior by passengers. The agency recently has handed out hefty fines in cases where passengers refused to wear masks or otherwise cause disruptions.

A Delta flight was diverted to Albuquerque on Friday night after a passenger approached the flight cabin in a way that forced flight attendants to act. Video shows several people holding down the passenger as he repeatedly says, “stop this plane.” https://t.co/R5Qka2TEZw pic.twitter.com/0GLCR2lIwN