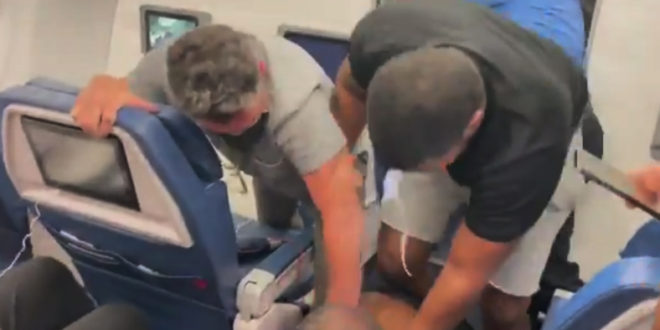 Witnesses have described the terrifying moment crew asked for ‘strong men’ to help subdue a passenger who tried to open a door on a Delta flight from Los Angeles to Atlanta.

An eyewitness said on Twitter that passenger grabbed the public address system in the front galley and made an announcement telling others to take their seats and to be prepared to put on their oxygen masks, before attempting to force open the door.

The passenger appeared to be wearing an orange life jacket. In response, flight attendants asked all “strong able-bodied men” to go the front of the plane to help. In video posted online, passengers and crew members can be seen restraining the man.

Someone tried hijacking our plane from LAX to ATL pic.twitter.com/fkPDPR60hu

The man made an announcement that we needed to be close to our oxygen masks & proceeded to try & open the door. They then called all the “strong men” to the front of the plane to restrain him. We ended up landing in OKC as it was the closest airport to us.

Photo of the man who tried to open the plane door mid-air of Delta airlines flight 1730. He was wearing a white helmet in the flight (via @SRDenton) pic.twitter.com/Et9azT1jtX

VIDEO: A closer look how passengers on Delta airlines flight 1730 handled the situation