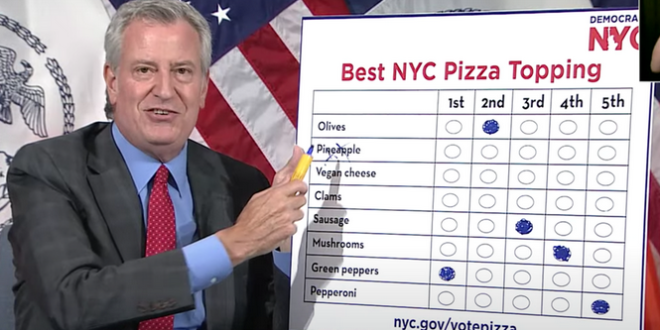 Hizzoner unveiled a bizarro chart of add-on’s as he tried to demonstrate how New York voters might negotiate the little-understood system that will be used to pick his successor in the June 22 Democratic primary.

But pineapple, de Blasio explained, “doesn’t belong on pizza.” “We’re not in California, OK?” de Blasio playfully shouted. “This is sacrilegious in Italy to put pineapple on a pizza. No way.”

The mayor said he’s “not ready” for vegan cheese, which was also a choice on the mock rated-choice ballot, but he “honors what the vegan cheese-makers are doing.”

The team at @DemocracyNYC has put together a tasty test run for New Yorkers to get ready for Ranked Choice Voting!

Pick your favorite pizza topping (but not pineapple!) at https://t.co/zIfxK4MG5g and get ready to make your voices heard on June 22. pic.twitter.com/HCho3LdYnd