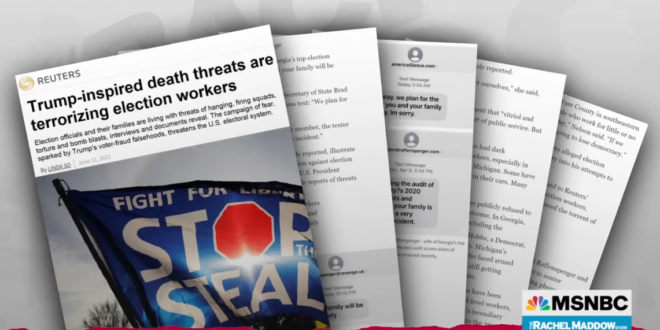 Last night Reuters publishing a grim deep dive into the death threats being rained down upon election workers by Trump supporters across the country. The piece has already garnered widespread attention, with Rachel Maddow devoting a segment of her show to it. Here’s how it opens:

Late on the night of April 24, the wife of Georgia’s top election official got a chilling text message: “You and your family will be killed very slowly.”

A week earlier, Tricia Raffensperger, wife of Secretary of State Brad Raffensperger, had received another anonymous text: “We plan for the death of you and your family every day.” That followed an April 5 text warning. A family member, the texter told her, was “going to have a very unfortunate incident.”

Those messages, which have not been previously reported, illustrate the continuing barrage of threats and intimidation against election officials and their families months after former U.S. President Donald Trump’s November election defeat.

Take the time today and read the full article. And watch Maddow’s take on it below. The second clip below from Reuters includes audio of some of the threats.

“It seemed like we were descending into this third-world mentality,” said Barron, 54, who has worked in elections for 22 years and volunteered as an election observer overseas. “I never expected that out of this country.”https://t.co/qtMbGPd31m