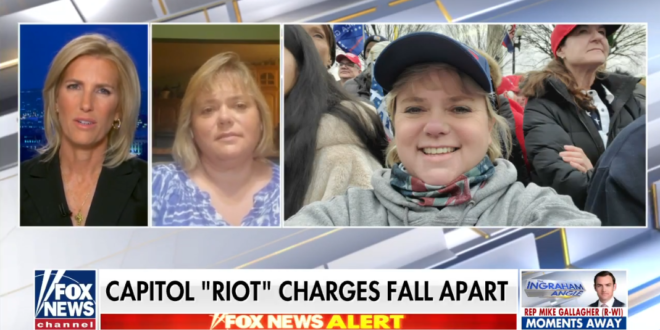 An Indiana grandmother told “The Ingraham Angle” on Thursday that her life has been turned upside down amid a report her court-appointed public defender coaxed her into drafting a written admission of White “guilt”, as she became the first suspect in the January 6 Capitol riot to be sentenced.

Anna Morgan-Lloyd of Bloomfield was convicted of one count of parading in a federal building, and Reagan-appointed federal Judge Royce Lamberth handed down a sentence of 3 years probation, a $500 civil restitution and 40 hours of community service.

Morgan-Lloyd later said that after her arrest, she was promptly fired by the hospital she had worked at for more than a decade – adding that the medical center wouldn’t let her retrieve her belongings and instead shipped them to her home via Federal Express.

Read the full article. Morgan-Lloyd told Ingraham that she simply walked into the Capitol to make sure that an elderly woman she had met was OK and that she witnessed no violence. Ingraham sneeringly mocked the charges against Morgan-Lloyd, claiming they had “fallen apart.” In fact, she received the full sentence sought by prosecutors. Ingraham framed her arrest as an attack on white people. Note the scare quotes around “riot” in Fox’s chyron. Watch the clip.

“People were very polite. It was calm enough that people were actually walking out of the Capitol bldg that worked there, no fear on their face at all.

Police officers didn’t tell anybody to leave. They were talking and chatting.”

A day ago she was in court crying in front of a judge, apologizing to the American public. https://t.co/p2NUtRVLcv