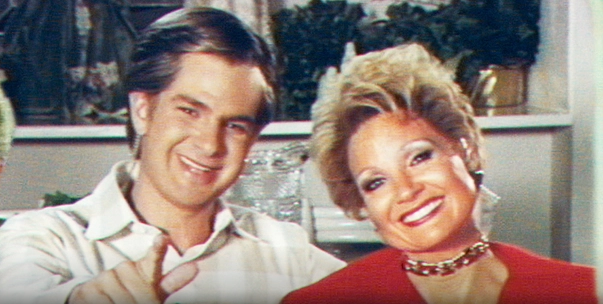 Jessica Chastain and Andrew Garfield are almost unrecognizable in the first look at The Eyes of Tammy Faye. The Zero Dark Thirty star is playing the famed televangelist in an upcoming biopic and People Magazine shared a first look at Chastain and Garfield as Tammy Faye and Jim Bakker. The movie was inspired by the documentary of the same name that showed the rise of the Bakker’s to fame on their Christian television network and the ultimate downfall due to a sex scandal. The film hits theaters on September 17.

Chastain was first moved by Tammy’s story after watching the documentary of the same name as the film and revisiting it in 2012. “It really touched me in that moment,” she says. The biopic, for which Chastain also serves as producer, tells the story of Tammy and her first husband Jim Bakker , who grew their Christian news program, the PTL Club, into a multi-million dollar industry before it collapsed following a sex scandal involving Jim and Jessica Hahn.

Here’s a photo of the recreation of my interview with Tammy Faye in the forthcoming feature film THE EYES OF TAMMY FAYE. That’s Randy Havens as me and Jessica Chastain as Tammy Faye! https://t.co/pbGUe4jvuj

jessica chastain and andrew garfield as tammy faye bakker and jim bakker in “the eyes of tammy faye” pic.twitter.com/Atlz747v69