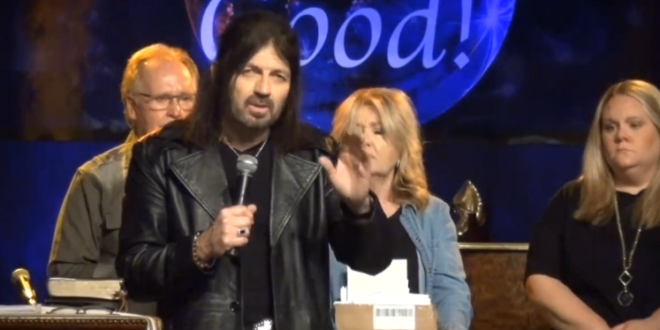 “I took a picture on my phone right on television and when I pulled it up, his eyes at that moment – if you’ll look at the eyes, you’ll notice they’re serpent’s pupils, they’re slotted pupils.

“Now, other times they’re not like that. But at times, it shows a slotted serpent’s eye. People say, ‘Oh, that was photoshopped.’ No, it wasn’t. I took the picture.

“And he shows up more than once with that slotted serpent’s eye. It’s because we’re back at that place where Satan is trying to offer the world that their eyes may be open, but it’s not King James anymore—it’s woke.” – Self-proclaimed prophet Robin Bullock.

Bullock last appeared on JMG when he declared himself to be the “mouthpiece of God” and warned that anybody who mocks him will be stricken with insanity.

Before that, we heard from him when he confusingly declared that he was “driving out homosexuality in Jesus’ name” because being gay is “just a coverup for being evangelists.”