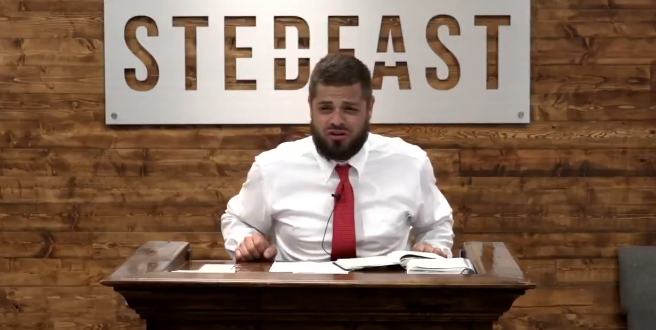 Hemant Mehta has the quote at The Friendly Atheist:

Look, there’s only one group that enjoys that: It’s the Pride parades going up and down the street.

And, you know, it’s great when trucks accidentally go through those, you know, parades. I think only one person died. So hopefully we can hope for more in the future.

You say, “Well, that’s mean.” Yeah, but the Bible says that they’re worthy of death! You say, “Are you sad when fags die?”  No, I think it’s great!

I hope they all die! I would love it if every fag would die right now. And you say, “Well, I don’t think that’s what you really mean.” That’s exactly what I mean. I really mean it!

According to Mehta, Pastor Jonathan Shelley’s church is affiliated with infamous “death to gays” Pastor Steven Anderson, who was in the news earlier this month due to an allegedly accidental $5500 donation from Louis Gohmert.

Yesterday, a Christian hate-preacher from Texas celebrated a gay man’s death at a Pride parade.

“It’s great when trucks accidentally go through those… parades… We can hope for more in the future… I think it’s great! I hope they all die!”

(Warning: The language gets worse) pic.twitter.com/3VsYC8KmjA

I wrote more about this here: https://t.co/LpUdcXtAoa

That church’s videos are still up on YouTube despite the blatant celebrations of violence against LGBTQ people.