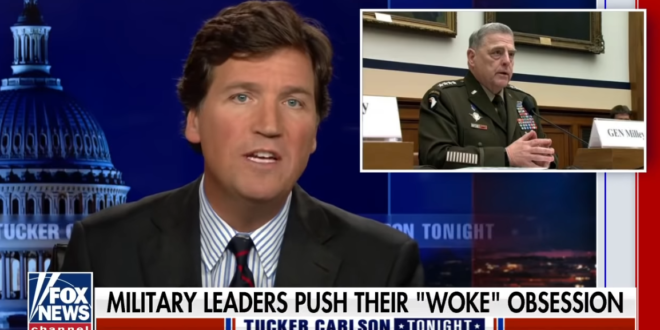 Fox News host Tucker Carlson slung mud at Gen. Mark Milley, the nation’s highest-ranking military officer, on Thursday evening, calling him “a pig” and “stupid” after the Army general defended the teaching of critical race theory in the military a day earlier.

“Mark Milley is the chairman of the Joint Chiefs of Staff,” the conservative personality said on “Tucker Carlson Tonight.” “He didn’t get that job because he’s brilliant or because he’s brave, or because people who know him respect him. He is not, and they definitely don’t.

“Milley got the job because he is obsequious. He knows who to suck up to, and he’s more than happy to do it. Feed him a script and he will read it. He’s not just a pig, he’s stupid,” he added after a second clip.

Here we see the Chairman of the Joint Chiefs of Staff, General Mark Milley, being slandered by the Autocratic movements chief propagandist @TuckerCarlson with ad hominem attacks. Milley has served this country in uniform for 42 years. Disgusting. https://t.co/fzGXkG8gRL

Best way to understand Tucker Carlson’s abuse of General Mark Milley tonight is as confirmation of the accuracy of the stories Gen Milley told about rebuffing ex President Trump’s order for a massacre in Portland, Oregon.

If Ilhan Omar or AOC attacked our troops like Tucker Carlson and Laura Ingraham do every night, would Sean Hannity blow a gasket?

Remember when he was angry that kneeling during the anthem disrespected the military? Tucker Carlson is a coward who never served anything other than his own bank account. https://t.co/A3E5zHAgRu