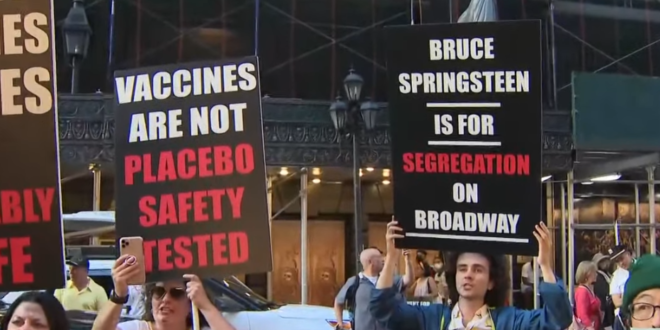 In a city whose cultural soul had been shuttered for more than a year with boarded up windows and empty streets, it was Springsteen who called it back to life on Saturday night, his gruff and guttural rasp the first to echo across a Broadway stage to a paying audience in 471 days.

Of course, “Springsteen on Broadway” is no traditional Broadway production — no mesmerizing choreographed musical numbers, no enchanted sets, no multi-page bios of cast members in the Playbill. The show consists of a man alone onstage; his ensemble a microphone, a harmonica, a piano and six steel strings.

“I am here tonight to provide proof of life,” Springsteen called out early on. It was a line from the monologue of his original show — which ran for 236 performances, in 2017 and 2018 — and now it carried extra weight.

“It’s great to be here,” Springsteen said to his excited audience, who had to prove they were vaccinated to take their seats and shout “Bruuuuuuuuuce!” “No masks, sitting next to each other in one room.” The crowd roared.

Protesters demonstrated outside rocker Bruce Springsteen’s “Springsteen on Broadway” show in New York City on Saturday night, complaining that only vaccinated fans were being allowed inside the theater, according to reports.

The demonstrators held up signs with messages such as, “Bruce Springsteen is for segregation on Broadway”; “We demand Equal Rights”; “Vaccine Mandates violate Bodily Autonomy”; and “My Body My Choice,” a sign more frequently held by women advocating for abortion rights.

At times arguments broke out between the protesters and concertgoers waiting to have their tickets scanned, but it appeared to remain mostly peaceful, according to reports.