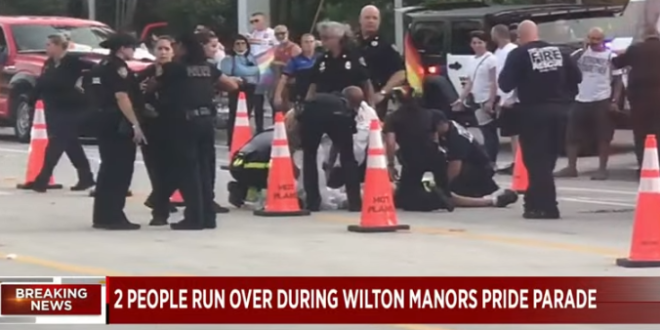 One person has died and another has been taken to the hospital after they were run over by a truck in Fort Lauderdale at the beginning of Stonewall Pride Parade, according to the city’s mayor.

Fort Lauderdale Mayor Dean Trantalis on Saturday night said police have apprehended the driver responsible for the crash at the festival, which is celebrated by Wilton Manors during Pride Month.

Trantalis said the driver of the truck acted like he was part of the parade. He said the motorist was on the parade route when he was was told to move up because he was next.

Video at the scene showed U.S. Rep. Debbie Wasserman Schultz, D-Fla., in tears while sitting in a convertible at the parade. Wilton Manors police said the parade has been canceled because of “a tragic event.” Police said the public is not in danger.

Officers were filmed administering CPR to one of the victims in the middle of the street.

Video posted to social media also showed a man being taken into custody that various witnesses and local media claimed to be the driver of the truck.

The man appeared to be wearing a shirt from the Fort Lauderdale Gay Men’s Chorus, with the acronym FTLGMC visible on his back written in rainbow-colored lettering. LGBTQ+ flags were also displayed on the truck.

Local 10 News reported the white pickup truck was lined up with other floats when it hit the gas and ran over two people standing by. Trantalis told the station Wasserman Shultz was in a convertible participating in the parade, and the truck missed her car by inches.

“This is a terrorist attack against the LGBT community,” Trantalis told Local 10 News. “This is exactly what it is. Hardly an accident. It was deliberate, it was premeditated, and it was targeted against a specific person. Luckily they missed that person, but unfortunately, they hit two other people.”

I would have gotten this post up an hour ago but I’m actually here in Wilton Manors for Pride with my ex and his husband. We didn’t witness the incident but word spread quickly through the crowd. We knew something was happening because of the police helicopters. Like much of the crowd, we left upon the news. While some are calling this terrorism, others are saying it was an accident. Attendance today was in the tens of thousands.

Photos from the scene where a truck drove into a crowd taking part in The Stonewall Pride Parade and Street Festival in Wilton Manors. Rep. Wasserman Schultz is seen reacting to the incident. @SunSentinel pic.twitter.com/UAIaa7yRTe

#NEW @NBC6 Video of a man under arrest after a pickup truck crashed into crowd at Wilton Manors Pride parade.

At least three people were hurt, one died. The parade and festival has been canceled.

We are waiting on a briefing from police. pic.twitter.com/8XNz1IV3sL

Due to a tragic event, the Stonewall Pride Parade has been cancelled but the festival events will continue.
*THERE IS NO DANGER TO THE PUBLIC.* https://t.co/als3T0MG4m

BREAKING NEWS: At least one person is dead after a pickup truck drove into the crowd at the #Stonewall Pride Parade in Wilton Manors tonight. This story is developing. https://t.co/95mxmE8Siy

MORE: Multiple people were run over by a truck just as the Stonewall Pride Parade and Festival was kicking off in Wilton Manors Saturday night https://t.co/9EqPBtbgip via @NBC6

The Stonewall Pride parade in Wilton Manors was canceled after a driver in truck ran 2 people over along the parade route pic.twitter.com/mOFifHUhWY

Previous Graham Pressures Christians To Get Vax In New Video
Next CHATTER AWAY: Overnight Open Thread