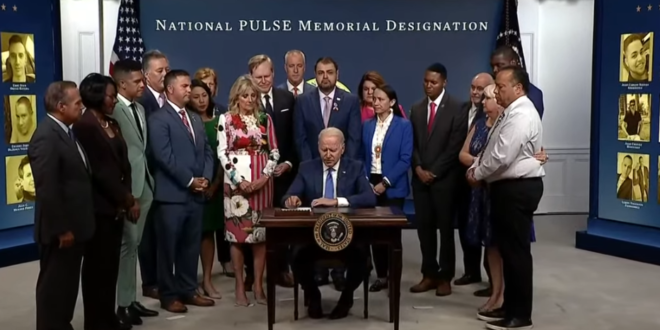 President Joe Biden has signed a law designating the Pulse nightclub in Orlando as a national memorial. Survivors of the 2016 shooting and the victims’ family members attended the signing ceremony at the White House.

“May no president ever have to sign another monument like this,” Biden said as he signed the law as survivors stood around him with pictures of those killed hanging on the walls.

The Pulse nightclub law is part of an effort to build a permanent memorial at the site in honor of the 49 people gunned down five years ago by a man armed with an AR-15-style assault rifle. Plans call for a reflecting pool, an open-air museum and an education center with gardens and a public plaza.

Pres. Biden signs National Pulse Memorial bill, “a monument to the loss that occurred there and absolute determination that we’re gonna…make sure that we’re not in a position to see this happen again.” https://t.co/1fI8apsG4W pic.twitter.com/zbbuVZk1kF