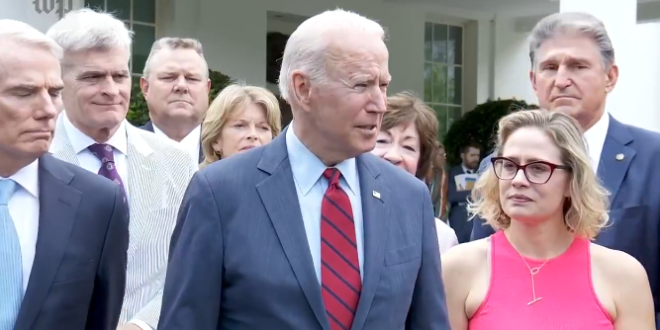 President Biden and a group of centrist senators agreed to a roughly $1 trillion infrastructure plan, securing a long-sought bipartisan deal on overhauling the nation’s transportation, water and broadband infrastructure that lawmakers and the White House will now attempt to shepherd through a closely-divided Capitol Hill.

“We had a really good meeting and to answer the direct question, we have a deal,” Mr. Biden told reporters at the White House. “We’ve all agreed that none of us got what we all would have wanted.” “I clearly didn’t get all I wanted. They gave more than I think they were maybe inclined to give in the first place,” he added.

His endorsement marked a breakthrough in his efforts to forge an infrastructure compromise, but it was far from a guarantee that the package would be enacted. Top Democrats have made it clear that the plan, which constitutes a fraction of the $4 trillion economic proposal Mr. Biden has put forth, can only move in tandem with a much larger package of spending and tax increases that Democrats are planning to try to push through Congress unilaterally, over the opposition of Republicans.

The two-track strategy promises to be a heavy lift for Democrats in a Congress where they have only the thinnest of majorities, and moderates and progressives have very different priorities. On Thursday, though, Mr. Biden and the centrist senators at the White House cheered their compromise. “We’ve agreed on the price tag, the scope, and how to pay for it,” said Senator Susan Collins, Republican of Maine.

BREAKING: President Biden says a bipartisan group of senators and the White House have struck a deal on a $953 billion infrastructure package. https://t.co/yskiEcfxcG

BREAKING: “We have a deal,” Pres. Biden says as he and a bipartisan group of senators announce framework infrastructure deal.

“This reminds me of the days when we used to get an awful lot done up in the United States Congress.” https://t.co/oMDIhXhMYl pic.twitter.com/QIXqY7FJLd