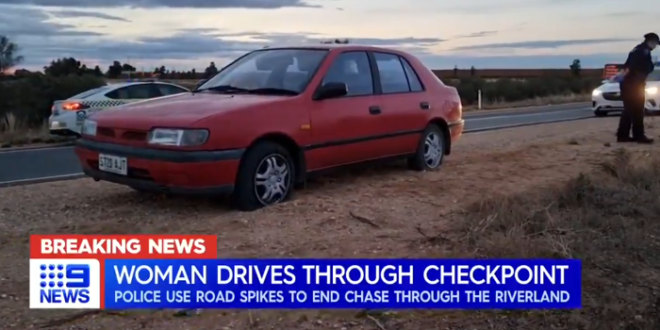 A South Australian woman who was arrested for allegedly failing to stop at a COVID-19 border crossing, after posting an anti-mask video live on social media, has been refused bail.

Celeste Lockwood, 37, from Renmark, appeared at the Berri Magistrates Court on Thursday charged with aggravated driving dangerously to escape a police pursuit, driving disqualified and failing to comply with a direction under the Emergency Management Act.

Police alleged Ms Lockwood stopped for several minutes at the Yamba border crossing near the Victorian–South Australian border and spoke to police before taking off. Police said road spikes were used to stop her car near Loxton North.

Read the full article. South Australia currently has a “hard border” with Victoria and those who enter the state must complete a 14-day quarantine.

The woman has been identified as Celeste Lockwood. The Covid skeptic posting an anti-mask rant online from Vic hours before she tried to cross back into SA. She was refused bail today and will remain behind bars for 2 weeks. Details tonight on @9NewsAdel https://t.co/jAtEcuE87p

A woman accused of driving through a SA border checkpoint posted an anti-mask rant online before the brazen dash.

Celeste Lockwood sparked a police chase when she refused to stop for officers, who were forced to use road spikes on her car.