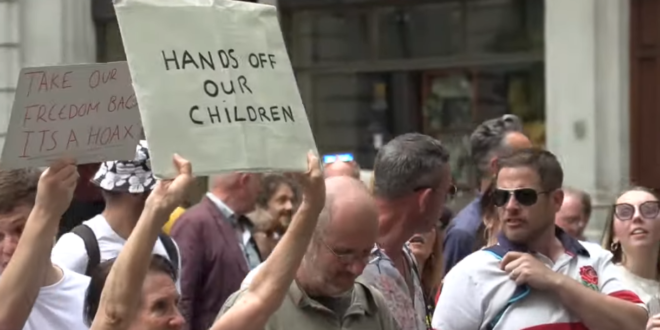 Thousands of anti-lockdown and anti-vax demonstrators marched through central London on Saturday. It was billed the “Freedom March” by protesters who assembled at Speakers’ Corner in Hyde Park from midday, some holding banners backing Donald Trump’s run for president in 2024, or supporting the far right conspiracy movement QAnon.

Many of those present estimated it was the biggest anti-lockdown event in the UK so far, although the Metropolitan Police did not confirm a figure. Some protesters appeared keen to share baseless conspiracy theories, one claiming that Covid vaccines were a deadly chemical weapon devised by the government to reduce the UK population.

Tweets below are from anti-vax, QAnon, right wing nutbags. In the final clip below, which must be watched on YouTube, a woman instructs a rapt crowd on how demonic satanists are harvesting “adrenochrome” from children. The channel isn’t monetized so your views don’t earn them anything.

I think this is the best sign I’ve spotted today #londonprotest. pic.twitter.com/VVdfJdARat

If the government is clearly not serving THE PEOPLE, then who are they serving ? Think about it! #londonprotest #enoughisenough June 26, 2021 pic.twitter.com/3b4DEhJshG

WE THE PEOPLE have NO confidence in our government. #londonprotest #enoughisenough June 26, 2021 pic.twitter.com/eO3mUJL6dC

Honestly, it was like a scene out of the film Magnolia – suddenly, all these truth stickers fell out of the sky and landed on this immaculate police vehicle just off Trafalgar Square… #londonprotest #London pic.twitter.com/jXySzZLkDI

Great moment during the London protest.
Brick in the wall being sung in unison by the crowd. 🙌 pic.twitter.com/YR0tqPAQGZ

Right now in London – people from across Britain are making themselves heard.

Looking forward to the corporate and state media’s total lack of coverage of the tens or hundreds of thousands of folks about to take part in today’s #londonprotest. After all, if it isn’t on the telly or the Internet, it didn’t happen! Freedom is slavery! Ignorance is strength! pic.twitter.com/NvzjPtK44g

June 26, 2021 ‘WE THE PEOPLE’ say NO to Medical apartheid and NO to vaccine passports. #londonprotest #EnoughIsEnough #NoVaccinePassportsAnywhere pic.twitter.com/pAAxrVDJD4

Previous McCarthy: Pelosi Is “Playing Politics” With Riot Probe
Next Drought In US West Brings “Plague” Of Grasshoppers