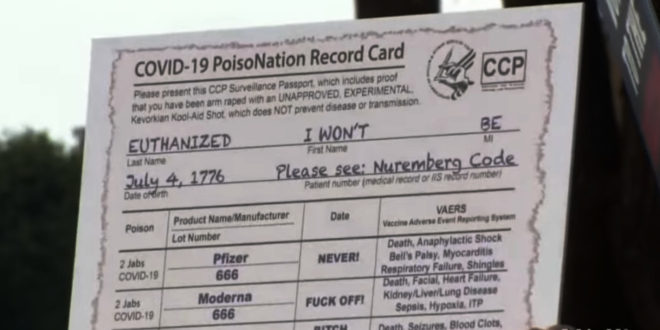 Anti-vaccine protesters congregated outside of Foo Fighters’ show at the Canyon Club in Agoura Hills, Calif. on Tuesday night (June 15). What looked like several dozen protesters carried signs reading “Foo Fighters fight to bring segregation back” and “event for vaccinated only, unvaccinated not allowed,” according to several Twitter posts. One Instagram post appeared to picture former child actor and known anti-vaxxer Ricky Schroder at the event.

The Foo Fighters’ show — the band’s first full capacity concert since the start of the pandemic — required proof of COVID-19 vaccination to purchase tickets. Schroder posted about the concert’s vaccine requirement on Facebook on June 13, writing: “Dave Grohl is an ignorant punk who needs slapped for supporting Discrimination. Ignorance comes in all shapes & sizes. Kurt Cobain is laughing at you Dave along with Millions of Patriots. Fool.”

This is what happens when you just want to attend a @foofighters concert at a small local concert hall and the next thing out know you’re a “Vaccine Segregationist”. #FooFighters pic.twitter.com/fyDAZ2QcXn

At a fully vaccinated @foofighters show at @canyonagoura and the anti-vaxxers are here in full force pic.twitter.com/Bf4QbmKVg1