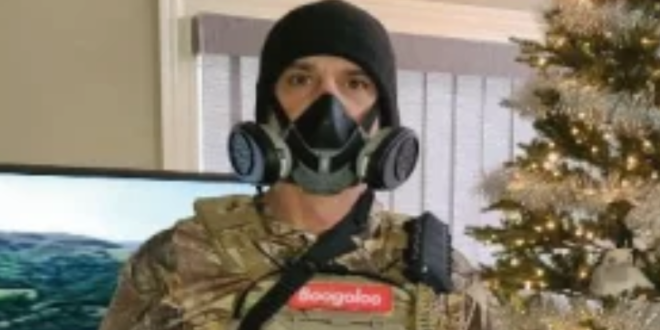 A U.S. Army veteran from Macomb County who wore clothing associated with the extremist “Boogaloo” movement was arrested Wednesday and charged with breaking into the U.S. Capitol during the Jan. 6 insurrection. Steven Thurlow, 50, a gunsmith from St. Clair Shores, is the 10th person from Michigan charged during a broader crackdown on the Jan. 6 insurrection that has led to more than 500 people being charged nationwide.

Investigators received tips leading to Thurlow, who previously worked as a cement finisher and filed for bankruptcy in 2014. One tipster warned investigators that Thurlow was a veteran who had become a conspiracy theorist. FBI agents received the first tip Feb. 18 when an acquaintance said Thurlow had posted photos on Facebook showing him inside the Capitol on Jan. 6, according to an affidavit filed in federal court.

#CapitolRiot: Yet another case just unsealed: Steven Thurlow, an Army veteran from St. Clair Shores, MI. Thurlow allegedly had a “Boogaloo” patch on his chest – a militia shorthand term for a “violent uprising or impending civil war,” the DOJ says. @wusa9 @EricFlackTV pic.twitter.com/1mrvcUb6Hl

LOL. Instead of deleting his Facebook, Steven Thurlow changed the name on it to Stephanie Danielle Thurlow, but didn’t change the URL, which remained under his real name. An acquaintance confirmed the account was his, that he had no daughters, and his wife isn’t named Stephanie. https://t.co/a4PG74FSqT