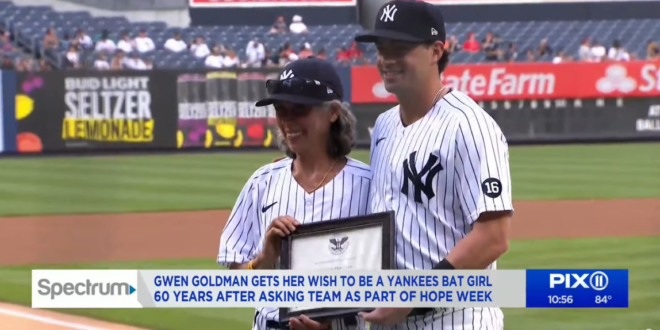 Gwen Goldman exchanged fist bumps with the New York Yankees, whom she had been admiring for decades from afar, walked onto the field and waved to the crowd. She got to be a Yankees’ bat girl on Monday night at age 70 — a full 60 years after she was turned down because of her gender.

Shaking with excitement, she beamed while recounting how it felt to be at Yankee Stadium on this day for the game against the Los Angeles Angels. Wearing a full Yankees uniform, Goldman threw out a ceremonial first pitch to New York player Tyler Wade, then stood alongside manager Aaron Boone for the national anthem.

In 1961, 10-year-old Gwen Goldman penned a letter to the Yankees expressing her dream of being a bat girl. The response she received from the GM at the time still hangs on her living room wall.

60 years later, in a new letter to Gwen from the current Yankees GM, Brian Cashman invites her to Yankee Stadium to fulfill her dream. pic.twitter.com/FHZK3SIfe5

In 1961, Gwen Goldman wanted to be a bat girl. The Yankees told her no.