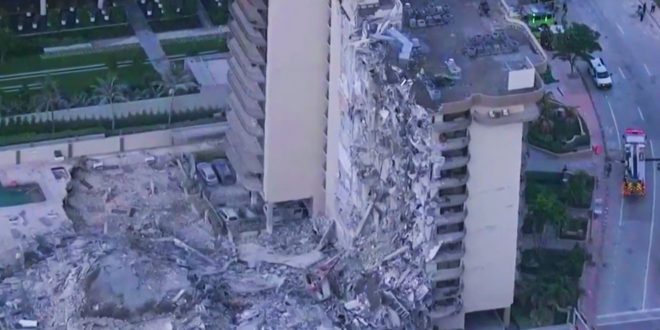 Miami-Dade County Fire Chief Ray Jadallah says 55 units in the Northeast corridor of the building collapsed, and 35 survivors were pulled out. Ten were treated at the scene, two were transported to the hospital. Surfside Mayor Charles Burkett confirmed at least one person has died. Authorities anticipate more fatalities but wouldn’t speculate on the number.

Frank Rollason, director of Miami-Dade Emergency Management, said emergency workers believe they have cleared all easily reachable survivors from inside the tower, which has more than 130 apartments. He said more than 70 of the units have been destroyed or damaged. “Everyone who is alive is out of the building,” he told the Miami Herald.

Surfside Commissioner Eliana Salzhauer said search and rescue operations could “play out for days.” A lightning storm was complicating those efforts Thursday morning.

“I mean, could be weeks until we really know who is under the rubble, who survived, who didn’t survive. There’s a lot of people unaccounted for, lot of families very concerned,” she said.

Though authorities have not released exact numbers, the mayor said there were “quite a few” people in the building at the time of the collapse. Some were able to make their way to the front of the structure as the back collapsed.

A family reunification center has been set up for anyone looking for unaccounted or missing relatives at 9302 Collins Avenue. If you have family members that are unaccounted for or are safe, please call 305-614-1819 to account for them. pic.twitter.com/ksQ9LubG8V

HOTLINE: Families who have relatives who live or work at the building and are unaccounted for or know that they are safe should call 305-614-1819 to notify officials, said Miami-Dade Fire Rescue, the agency taking the lead in the search-and-rescue mission. https://t.co/EEQoHI0TUE

JUST IN: Video I’ve obtained of the building collapse in Surfside, Florida. pic.twitter.com/BGbRC7iSI9

For some perspective on the Miami Beach building collapse, everything to the left of the red line is gone. pic.twitter.com/NaXXYm9jfO