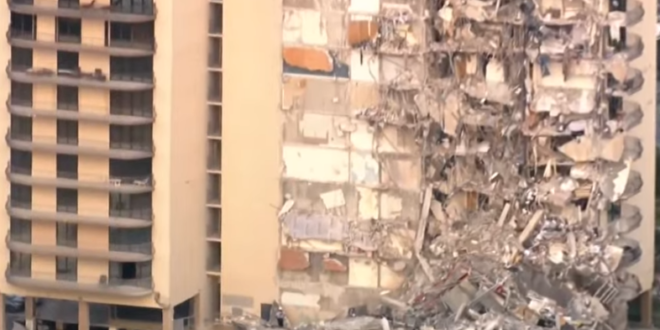 A Florida high rise that collapsed early Thursday was determined to be unstable a year ago, according to a researcher at Florida International University. The building, which was constructed in 1981, has been sinking at an alarming rate since the 1990s, according to a 2020 study conducted by Shimon Wdowinski, a professor in the Department of Earth and Environment.

When Wdowinski saw the news that the Champlain Towers South condominium in Surfside had collapsed, he instantly remembered it from the study, he said. “I looked at it this morning and said, ‘Oh my god.’ We did detect that,” he said. Wdowinski said his research is not meant to suggest certainty about what caused the collapse. The building was sinking at a rate of about 2 millimeters a year in the 1990s, and could have slowed or accelerated in the time since, he said.

Collapsed Miami condo had been sinking into Earth as early as the 1990s, researchers say. “When he heard the news that a condo had collapsed, he immediately knew which building it was, Shimon Wdowinski said. I … said ‘Oh my god.’ We did detect that.” https://t.co/bpvVbuOjLf