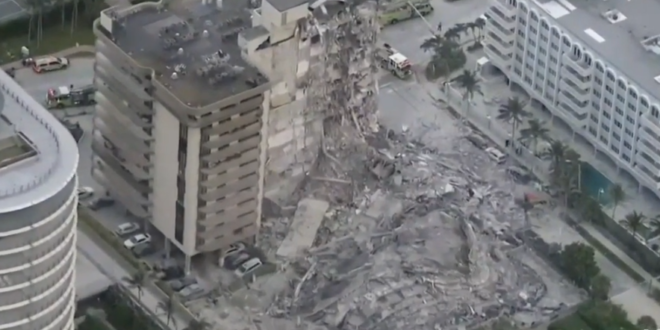 Engineers who evaluated the South Florida condo that partially collapsed Thursday, leaving dozens trapped under the rubble, warned in a 2018 report of a “major error” in the construction’s original development. The report – released late Friday by officials in Surfside, Fla., – notes that the building’s reinforced concrete slab is not sloped to drain.

As search-and-rescue teams continue to look for any possible survivors, the newly disclosed report shows Frank Morabito told building managers of “major structural damage” to the concrete at Champlain Towers South. City officials released the report as investigators start to seek a definitive explanation of the collapse. Authorities say 159 people are still missing.

Kenneth S. Direktor, a lawyer who represents the resident-led association that operates the building, said this week that the repairs had been set to commence, based on extensive plans drawn up this year.

“They were just about to get started on it,” he said in an interview, adding that the process would have been handled much differently if owners had had any indication that the corrosion and crumbling — mild instances of which are relatively common in many coastal buildings — were a serious threat.

But Eliana Salzhauer, a Surfside commissioner, said that while the cause of the collapse was unknown, it appeared to her that the problems identified by the engineer in the 2018 report could have contributed to the structural failure.

Breaking News: An engineer warned in 2018 of “major structural damage” at the Florida condo building that collapsed this week as many residents slept. https://t.co/hAVErvnCif