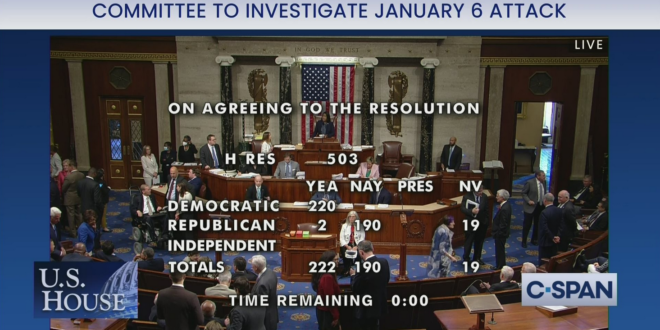 In a largely party-line vote, the Democratic-controlled House of Representatives approved legislation on Wednesday to create a select committee to launch a new inquiry into the Jan. 6 attack on the U.S. Capitol.

With a larger share of Republicans voting against the plan, it marks the latest turn in a partisan fight to investigate the riot.

As invited members of Washington’s Metropolitan Police Department and U.S. Capitol Police looked on from the gallery, Democrats blasted GOP members who opposed the select committee ahead of the vote.

The House voted 222-190 to formally create the select panel. Just two Republicans joined with Democrats to support its formation – Reps. Liz Cheney of Wyoming and Adam Kinzinger of Illinois.

Ahead of the vote, House Speaker Nancy Pelosi said on the floor that she was “heartbroken” Congress could not establish a bipartisan commission.

Even though the speaker said she was still “hopeful” that a bipartisan commission could happen in the future, Congress had to move forward with the select committee.