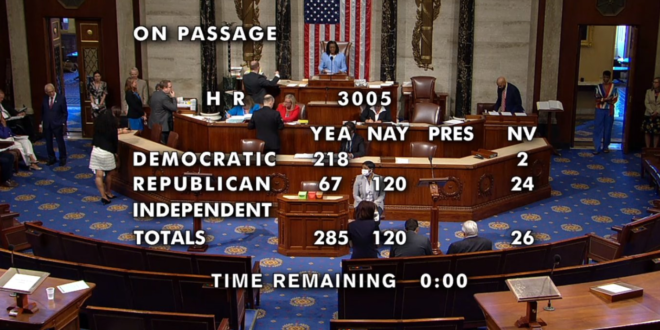 The House on Tuesday approved legislation to remove statues of Confederate officials from the U.S. Capitol, as well as a bust of Chief Justice Roger B. Taney, who wrote the Supreme Court’s infamous Dred Scott decision in 1857 that ruled Black people were not entitled to citizenship.

The legislation passed with a vote of 285 to 120, with 67 Republicans joining all Democrats voting in favor of the bill.

As Democrats now hold the majority in the upper chamber, it will likely be taken up for a vote, but whether a sufficient number of Republican senators would vote to advance the bill is unclear. Democrats have a 50-seat majority in the Senate, and 60 votes are required to limit debate on a measure.

UPDATE: U.S. House votes 285-120 to remove Confederate statues from public display in the Capitol as well as the bust of Chief Justice Roger B. Taney, who wrote the 1857 Dred Scott decision; 67 Republicans joined Democrats to advance the bill. https://t.co/7hZrKG3OUK

The House voted 285-120 today to stop glorifying & honoring Confederate supporters and white supremacists, and to remove their monuments from the U.S. Capitol. The 120 votes against this were all Republicans, of course. #RemoveHate https://t.co/Q1AWe33XZ0