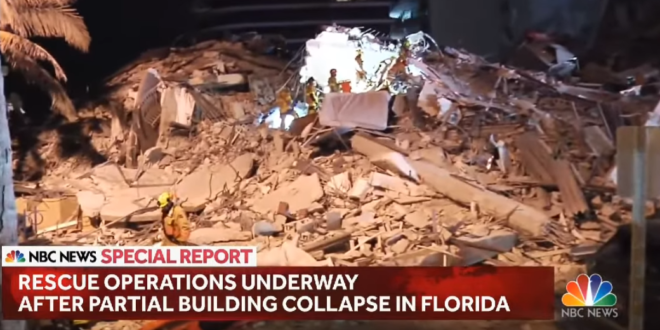 A 12-story oceanfront condo tower partially collapsed early Thursday morning on Collins Avenue in the town of Surfside, spurring a massive search-and-rescue effort with dozens of rescue crews from across Miami-Dade and Broward counties.

Part of Champlain Towers South Condo, completed in 1981 with more than 100 units at 8777 Collins Ave., collapsed around 2 a.m. Miami Beach police confirmed the address of the building on Twitter. A portion of the building facing the beach crumbled, leaving a heap of rubble.

Miami-Dade Mayor Daniella Levine Cava said the county’s Fire and Rescue Department was taking lead in rescue operations, with city and county first responders on the scene. She said “cause unknown” as to the partial collapse of the 12-story building.

At least one person was killed and a massive search and rescue effort was underway following the partial collapse of a 12-story condominium building in Surfside early Thursday. Miami-Dade Fire Rescue officials said more than 80 units responded to the collapse at the condominium building near 88th Street and Collins Avenue just north of Miami Beach around 2 a.m.

MBPD and @MiamiBeachFire are assisting the Town of Surfside at a partial building collapse located at 8777 Collins Avenue in Surfside, Florida. Multiple police and fire agencies from across Miami-Dade are assisting. Please follow @MiamiDadeFire for updated information. pic.twitter.com/8tORIfZfjY

Boy rescued from the rubble of a building collapse in Surfside, Florida — near Miami Beach.
Hundreds of first responders are on the scene right now.
Rescue operation continues at 8777 Collins Ave. pic.twitter.com/Hnq7Gd9QW4

At 2:00AM ET an 8 story apartment complex in Surfside, Florida collapsed. Over 80 Fire/Police/Amb are at the scene. pic.twitter.com/w80dn9epxV

Authorities in South Florida were responding early Thursday to a “partial building collapse,” the Miami-Dade Fire Rescue said. The scene is in Surfside, a few miles north of Miami Beach.https://t.co/0dg6VMiCAn pic.twitter.com/v7xZzna0xt