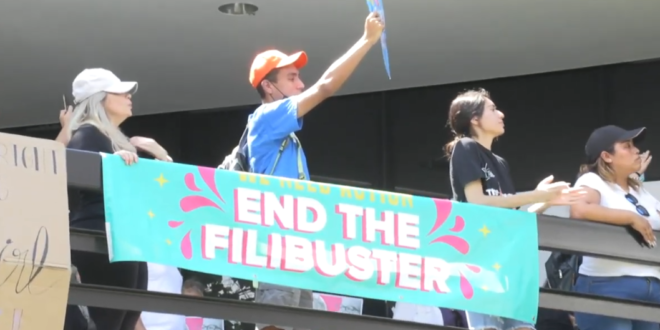 Ten people were arrested Tuesday during a protest outside the Phoenix office of Sen. Kyrsten Sinema. The demonstration came the day after the Democratic Senator voiced her support of the “filibuster,” a Senate rule that requires 60 votes to pass most bills. Those who oppose the filibuster say lawmakers use it to block legislation.

Protesters carried signs that read “End the filibuster,” and “Protect Our Democracy,” and “Shame! Shame!” Officers made announcements over a loudspeaker, asking the group to leave. Additionally, detectives approached each person individually, asking them to leave. However, ten people continued to ignore the officers’ requests, police say.

10 people were arrested on June 22 during a protest over the Senate filibuster outside Senator Kyrsten Sinema’s office in Phoenix. https://t.co/lBlPhlenFi