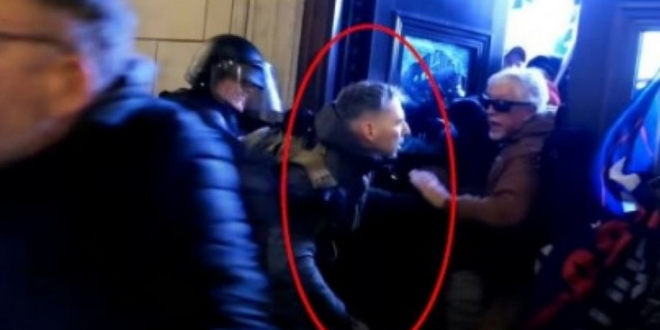 A Marine Corps officer was arrested Thursday for alleged crimes during the U.S. Capitol riot on Jan. 6, becoming the first known active-duty service member charged in the violent attempt to thwart the certification of Joe Biden’s election as president.

Maj. Christopher Warnagiris, 40, stationed at Marine Corps Base Quantico, was charged with five counts, including assaulting and obstructing police during a civil disorder and obstructing an official proceeding of Congress, federal prosecutors said.

The attack on the Capitol prompted the Pentagon to refocus efforts on weeding possible extremists out of the active-duty ranks, with a recent military-wide “stand-down” for service members to discuss the issue.

The US Marine Corps confirmed Warnagiris’s status as an active-duty Marine and said in a statement that it condemns “racial hatred or extremism in the Marine Corps,” adding: “Bigotry and racial extremism run contrary to our core values.”

“Participation with hate or extremist groups of any kind is directly contradictory to the core values of honor, courage, and commitment that we stand for as Marines and isn’t tolerated by the Marine Corps,” Major Melanie Salinas, a USMC spokesperson, said in the statement.

An active-duty Marine major stationed in Quantico, Virginia was arrested on Thursday and charged with assault and obstruction of law enforcement officers during the Jan. 6 Capitol riots in Washington, D.C. https://t.co/RMRG5g28Ny