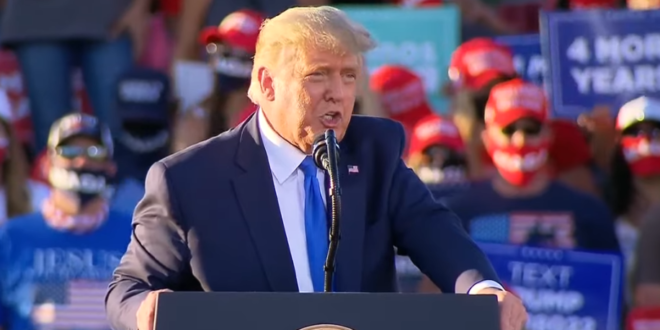 Social media interactions about Former President Donald Trump have gone down to 91 percent since January, according to data compiled by NewsWhip.

The company found that from Jan 6 to May 3, social media interactions about the former president dropped dramatically after the end of his second impeachment trial.

Trump still remained a heavy topic in the wake of the Jan. 6 insurrection at the Capitol, but interactions have since gradually fallen off.

Read the full article. As you can see below, today Trump is using his new blog in an attempt to evade Twitter’s ban. Calls to ban the new account are currently trending at #1.

.@Liz_Cheney is a warmongering fool who has no business in @GOP Leadership. We want leaders who believe in the MAGA movement and prioritize the values of America First. @EliseStefanik is a far superior choice. She has my COMPLETE and TOTAL endorsement for GOP Conference Chair.

What Facebook, Twitter and Google have done is a total disgrace and an embarrassment to our Country. Free Speech has been taken away from the POTUS because the Radical Left Lunatics are afraid of the truth, but the truth will come out anyway, bigger and stronger than ever before.

Had Mike Pence referred the information on six states (only need two) back to State Legislatures, and had gutless and clueless MINORITY Leader Mitch McConnell (he blew two seats in Georgia that should have never been lost) fought to expose all the corruption that was presented…

with more found since, we would have had a far different Presidential result, and our Country would not be turning into a socialist nightmare!
Never give up!

Former President Donald J. Trump is not Tweeting. Any post made, aside from replies like this one, are direct copies from the forum that’s composed at https://t.co/gwl4GAEKAt. Posts are made by Save America on behalf of the 45th POTUS, then distributed onto this platform. https://t.co/Pbe6noAlrh

Previous Breaking: US Backs Patent Waivers For COVID Vaccines
Next Mike Lindell Screams After Getting Banned By Vimeo