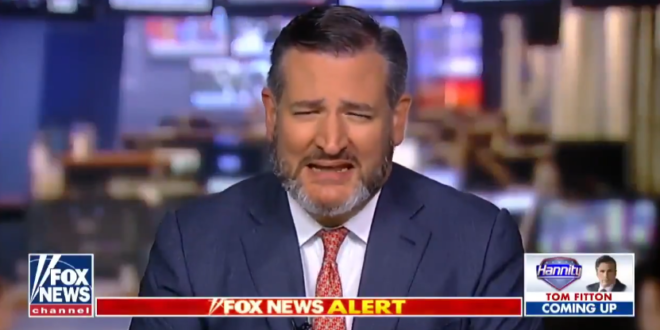 Twitter is abuzz over a clip that shows a fly crawling into Texas Senator Ted Cruz’s mouth and being washed down with bottled water during an appearance on Fox News’ Hannity program. The brief clip, without sound, rocketed around Twitter on Wednesday night, and by Thursday morning, #ToadCruz was the number one trending topic on the platform — helped along with some blue-check amplification.

UPDATE: At this writing Mediaite has not made any changes to their post but others on Twitter are saying the clip is fake. I’ve updated the headline to this post.

Alas, just saw the original video and confirmed that this is fake. https://t.co/lfd1SiHfFH

The “Ted Cruz swallowed a fly on Fox News” video is fake.