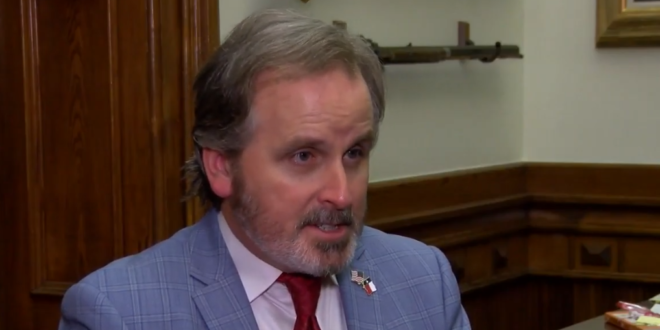 In the course of several hours Saturday and early Sunday, Senate Republicans hurtled to move forward on a sweeping voting bill negotiated behind closed doors where it doubled in length and grew to include voting law changes that weren’t previously considered.

Over Democrats’ objections, they suspended the chamber’s own rules to narrow the window lawmakers had to review the new massive piece of legislation before giving it final approval ahead of the end of Monday’s end to the legislative session.

Instead of giving senators the 24 hours required under the chamber’s rules to go over the committee’s report, including those new additions, state Sen. Bryan Hughes [photo], moved to ignore that mandate so the Senate could debate and eventually vote on the final version of the bill just hours after it was filed.

The sweeping measure, Senate Bill 7 or SB7, passed on party lines around 6am, after eight hours of questioning by Democrats who have virtually no path to stop it. The bill must still clear a final vote in the Texas House later on Sunday in order to reach Governor Greg Abbott, who is expected to sign it.

“I have grave concerns about a bill that was crafted in the shadows and passed late at night,” said one Democratic state senator, Beverly Powell.

In closed-door negotiations, Republicans added language that could make it easier for a judge to overturn an election and pushed back the start of Sunday voting, when many Black churchgoers go to the polls.

The bill, S.B. 7, includes several controversial provisions that critics say would disproportionately affect poor and minority voters. It also specifically targets voting practices employed this past year in Harris County, which includes Houston, by banning drive-through voting and 24-hour voting. Those practices were used by 140,000 voters in 2020.

S.B. 7 makes it a state jail felony for local officials to attempt to send mail-in ballot applications to voters who did not request them, a practice Harris County employed in 2020. The bill also limits early voting and implements more restrictions on absentee voting, including adding more identification requirements for those who wish to vote-by-mail.