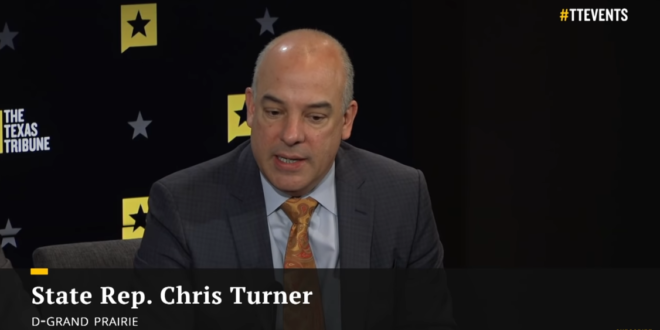 The sweeping overhaul of Texas elections and voter access was poised from the beginning of the session to pass into law. It had the backing of Republican leaders in both chambers of the Legislature. It had support from the governor.

Democrats who opposed the bill, chiding it as a naked attempt of voter suppression, were simply outnumbered. But on Sunday night, with an hour left for the Legislature to give final approval to the bill, Democrats staged a walkout, preventing a vote on the legislation before a fatal deadline.

“Leave the chamber discreetly. Do not go to the gallery. Leave the building,” Grand Prairie state Rep. Chris Turner [photo], the chair of the House Democratic Caucus, said in a text message to other Democrats obtained by The Texas Tribune.

Gov. Greg Abbott (R) tweeted that he would add the bill to a special session he plans to call later this year to address legislative redistricting. “Legislators will be expected to have worked out the details when they arrive at the Capitol for the special session,” he wrote.

But it was an unmistakable defeat for the governor and fellow Republicans, who had crafted one of the most far-reaching voting bills in the country — pushing restrictions championed by former president Donald Trump, who has falsely claimed that his defeat in the 2020 election was tainted by fraud.

Republicans hashed out a final version behind closed doors late last week over the objections of Democrats, civil rights leaders and business executives, who said the measure targets voters of color.

They STILL must pass.

They will be added to the special session agenda.

Legislators will be expected to have worked out the details when they arrive at the Capitol for the special session.

I support @GregAbbott_Tx call for a Special Session for #SB7, #SB10, #SB12, #SB21 & #SB29 and #SB1311 and other key legislation. The Texas Senate passed all these priority bills months ago and we will again. The TxHouse failed the people of Texas tonight. No excuse. #txlege