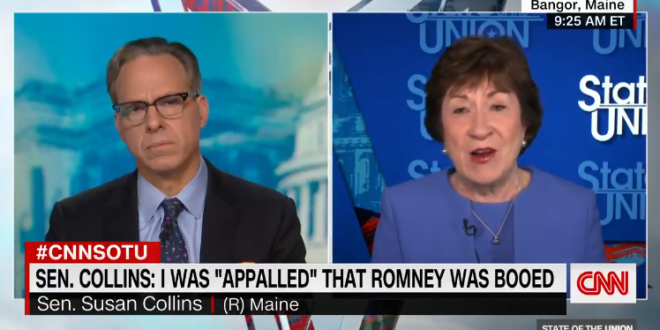 Senator Susan Collins (R-ME) rebuked the jeering that her colleague Mitt Romney received when he appeared before the Utah Republican Party at their convention over the weekend. “I was appalled,” Collins said. “Mitt Romney is an outstanding senator who serves his state and our country well. We Republicans need to remember that we are united by fundamental principles… We are not a party that is led by just one person.”

Republican Sen. Susan Collins says that she was “appalled” by the Utah GOP booing and attempting to censure Sen. Mitt Romney. “We are not a party that is led by just one person.” #CNNSOTU https://t.co/KE6cvsT64I pic.twitter.com/KPXkUgWhcX

Collins: “There was a different approach that was used for the 2017 tax cuts.” pic.twitter.com/6zjIt2Cj1m