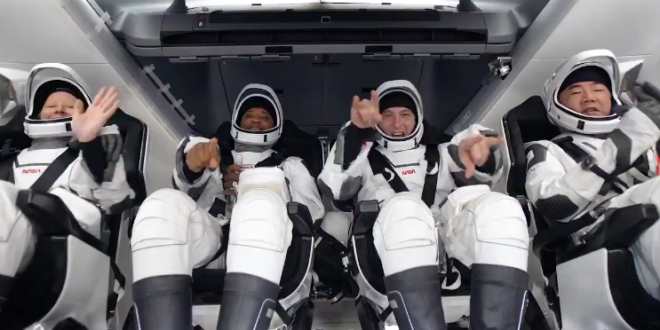 A SpaceX Crew Dragon capsule soared back from outer space Sunday morning and made a parachute landing in the Gulf of Mexico, returning four astronauts from a record-setting mission to the International Space Station.

The astronauts — NASA’s Michael Hopkins, Victor Glover, Shannon Walker, and Soichi Noguchi, an astronaut with Japan’s space agency — had boarded their Crew Dragon capsule Friday afternoon, and they spent all night aboard the 13-foot-wide, fully autonomous capsule as it conducted a series of engine burns and maneuvers to prepare itself for reentry.

The spacecraft fired up its engines to slice back into the Earth’s thick inner atmosphere around 2 am ET, and the capsule deployed a series of billowing parachutes to slow its descent before splashing down off the coast of Panama City, Florida at 2:56 am.

A SpaceX Crew Dragon capsule returns four astronauts to Earth after a record-setting mission to the International Space Station https://t.co/bNRedFod9y

In the most fitting fashion, their mission, which certified the return of astronaut launches from the U.S., ended with an equally historic nighttime splashdown at 2:56am ET (06:56 UT): https://t.co/xQUMykAB30 pic.twitter.com/pt3lSHkmlH

After 167 days in space, the longest duration mission for a U.S. spacecraft since the final Skylab mission in 1974, Dragon and the Crew-1 astronauts, @Astro_illini, @AstroVicGlover, Shannon Walker and @Astro_Soichi, returned to Earth this morning! pic.twitter.com/vuWPPrreyh