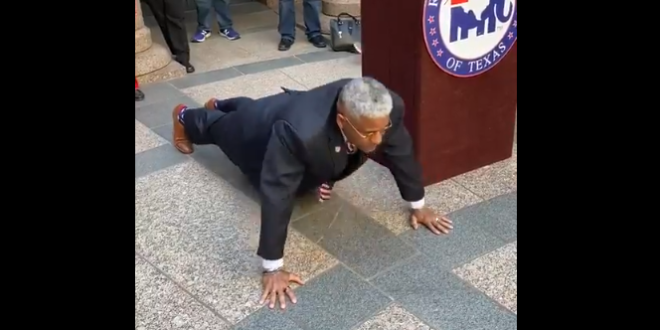 Video evidence shows retired Army Lt. Col. Allen West can move his body as if doing a push-up but it is unclear whether or not he can still do one correctly. West challenged a reporter to a push-up contest on Wednesday, according to NBC reporter Jane Timm, after the other journalist showed up late to a press conference.

Challenging people to push-up contests is apparently totally normal and perfectly appropriate for a 60-year-old man who is now in charge of the Texas Republican Party.

Although the reporter “respectfully declined,” West went ahead and did the push-ups himself. Timm captured the stunt on video and posted it on Twitter, which led to military service members chiming in far and wide to comment on how many push-ups West performed. The consensus: Zero.

Decided to write about this https://t.co/0GgjK07SDI

The reporter did the same number of push-ups that Allen West did https://t.co/udMGXaQAgH

Allen West “nearly faced court-martial after he brandished a pistol and then fired it near the head of an Iraqi prisoner during an interrogation in 2004. The Army fined him $5,000 instead, and he retired soon after.” Via @TaskandPurpose https://t.co/v7k7yfyXTC

Previous Capitol Police: Threats To Congress Up 107% This Year
Next Larry Klayman Fails To Appear At Hearing To Boot Judge From Roy Moore’s $95M Lawsuit Against Sasha Cohen