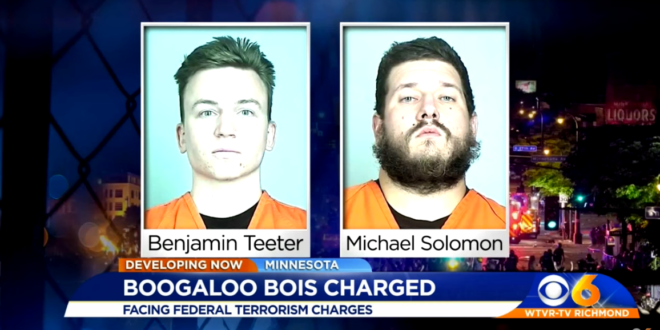 A Minnesota man pleaded guilty today to conspiracy to provide material support and resources, namely property, services and weapons, to what he believed was Hamas, a designated foreign terrorist organization, for use against Israeli and U.S. military personnel overseas.

According to court documents, Michael Solomon, 31, of New Brighton, Minn., was a member of the “Boogaloo Bois,” a group of individuals who espouse violent anti-government sentiments.

In late May 2020, the FBI initiated an investigation into Solomon and co-defendant Benjamin Ryan Teeter, both members of the “Boogaloo Bois,” and a sub-group called the “Boojahideen.”

According to court documents, on June 10, 2020, Solomon and Teeter met with a confidential human source (CHS), whom the defendants believed to be a member of Hamas.

During this meeting, Solomon and Teeter proposed assisting Hamas as a means of furthering the goals of the Boogaloo Bois.

Solomon pleaded guilty to one count of conspiracy to provide material support to a designated foreign terrorist organization.

Solomon faces a maximum penalty of 20 years in prison. A federal district court judge will determine any sentence after considering the U.S. Sentencing Guidelines and other statutory factors.

As you may recall, the two men cited above went viral in May 2020 after they marched into a Raleigh-area Subway outlet with their assault weapons. Teeter pleaded guilty in December and is awaiting sentencing.

Remember the heavily armed insurrectionists who showed up at a Raleigh-area Subway in May? Two of those men are now accused of attempting to sell gun parts to Hamas; they wanted to be “mercenaries” to earn money to support the Boogaloo movement. #ncpol https://t.co/AGcsxpuGpR