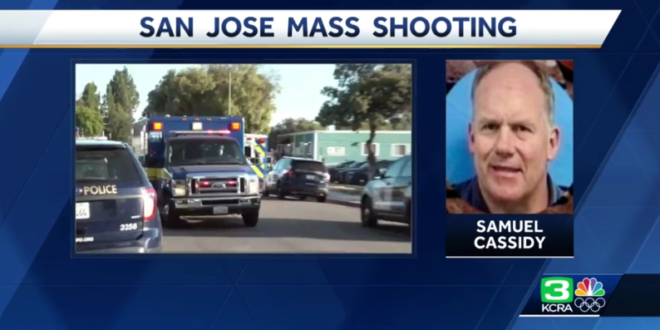 San Jose Gunman Was Detained By Border Patrol In 2016, Had Books On Terrorism, Notes About Workplace

U.S. Customs officers previously detained the man who killed nine people in San Jose, Calif., Wednesday and found that he professed a hatred of his workplace where the shooting occurred, according to a Department of Homeland Security memo.

The shooter, Samuel James Cassidy, possessed “books about terrorism and fear and manifestos…as well as a black memo book filled with lots of notes about how he hates the VTA,” when Customs and Border Protection detained him in 2016 after a trip to the Philippines, the memo says.

The VTA is the Santa Clara Valley Transportation Authority, where he worked for at least nine years, according to public employment records.

The gunman who killed nine colleagues at a light rail yard in Northern California before killing himself appeared to target his victims, a sheriff told CNN on Thursday.

During Wednesday morning’s rampage at the Santa Clara Valley Transportation Authority (VTA) property in San Jose, the shooter told a local union official there that “I’m not going to shoot you,” Santa Clara County Sheriff Laurie Smith said. The union official does not work for VTA, Smith said.

The gunman, a VTA employe armed with two semiautomatic handguns, fatally shot nine coworkers inside two buildings around the time of a morning shift change before taking his own life in front of responding law enforcement officers, authorities have said.

The attacker was identified as 57-year-old Samuel Cassidy, according to two law enforcement officials who were not authorized to discuss the investigation publicly and spoke to The Associated Press on condition of anonymity.

The 9 mm handguns he had appear to be legal, Smith said, though his 11 high-capacity magazines — each with 12 rounds — are prohibited in California. Authorities do not yet know how he obtained the weaponry.

The sheriff said he also appeared to have set a timer or slow-burn device to set his home on fire, and authorities also found explosives there. The fire was reported minutes after the first 911 calls came in from the rail facility.

Breaking: The San Jose gunman who killed nine people Wednesday was detained years ago by law enforcement who found he had books about terrorism and notes about hating his workplace where the shootings occurred, a government memo says https://t.co/evCqb01bPL