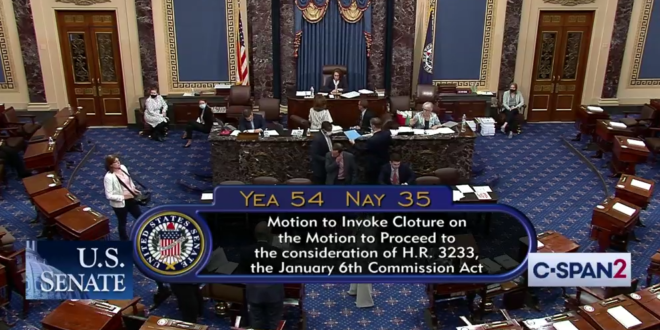 The key procedural vote on the Jan. 6 riot commission is underway on the Senate floor, and it is expected to fail to reach the needed 60 votes to move on to the actual bill.

Senate Majority Leader Chuck Schumer explained that the deal they’ve made with Republican senators is a “good solution” because they get to vote on the commission, and it occurs “in the light of day, not at three in the morning.”

Schumer also said it’s a deal that Democrats proposed. Schumer said he will speak more on the commission after the vote as well.

Meanwhile, Sen. McConnell is incercepting every Republican Senator as they come to vote.

The vote was 54-35, 11 senators, almost all Republicans, skipped town. Change the rules.

The vote was 54 in favor of the commission and 35 against, but because of the Senate’s antiquated filibuster rules, the motion failed for lack of 60 votes. pic.twitter.com/kginMBqHJZ