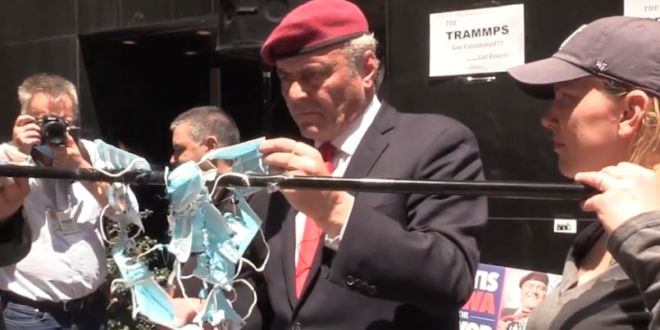 “It feels great,” said Curtis Sliwa, the Guardian Angels founder, as he worked to torch a few disposable masks on a rod outside Empire Steakhouse in Midtown.

Sliwa had promised an inferno where attendees could torch their face coverings while members of ’70s disco group The Trammps sang their hit “Disco Inferno” — though the blue medical masks, made partially from plastic, appeared more to sizzle and melt onto the makeshift spit-roast.

As I noted when Sliwa launched his mayoral run, he is perhaps best known to New Yorkers for faking his own kidnapping by three off-duty transit cops in what he claimed was an attempt to drive publicity for the Guardian Angels.

As you can see in the final clip below, the Trammps did show up to accompanying the ceremony with their 1976 classic, “Disco Inferno.”

Sliwa’s campaign is backed by nutbag grocery billionaire John Catsimatidis, who appears in the clip by 77 WABC, which he owns and which hosts Rudy Giuliani’s show. Catsimatidis himself ran for NYC mayor in 2013, finishing second in the GOP primary.

Silwa soaked his hand in an ice bucket as he continued burning more masks. pic.twitter.com/RSlWOcJDI5

NYC Mayor candidate Curtis Sliwa kicks off his campaign with dancers, singers and The Trammps ‘Disco Inferno blaring as he attempts to burn masks on a pipe, except he can’t get them lit. pic.twitter.com/BsIpi1Fsvp