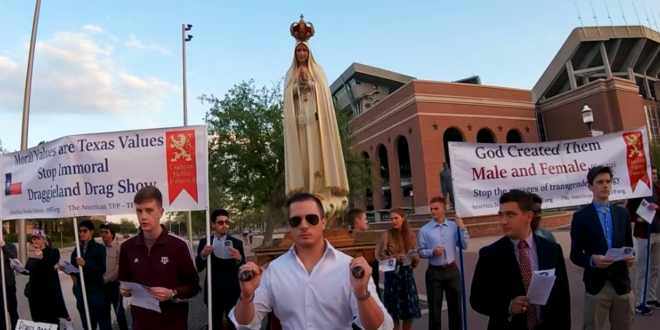 Via email from TFP Student Action:

On the opposite side of the Rudder Tower, some thirty Catholics carrying a statue of Our Lady of Fatima prayed the rosary and belted out hymns.

Volunteers with Tradition, Family, and Property — Texas, joined students and alumni to oppose an immoral event called “DRAGgieland” being held at Rudder tower that evening. In addition to the rally, TFP Student Action gathered over 19,000 signatures to cancel the event.

“DRAGgieland” is a play on words which mixes the beloved nickname of A&M (Aggieland) with the perverted cross-dressing expression “drag.” Concerned students contacted members of TFP—Texas to help organize a rosary rally in protest of the drag show event, since it is incompatible with A&M’s core values of Respect, Integrity and Excellence.

DRAGgieland is pushed by the LGBT movement to normalize homosexual sin and its bisexual and transgender variants. As such, it is an attack on right reason, the natural moral law, divine positive law and undermines the institution of the family, the bedrock of society.

TFP stands for Tradition, Family, Property. For real. In the second clip below, the group protests the “Satanic rock music” being played by Seton Hall’s student radio station. According to a recent message from TFP, America can only be saved by returning to the “biblical rule” of the Crusades.