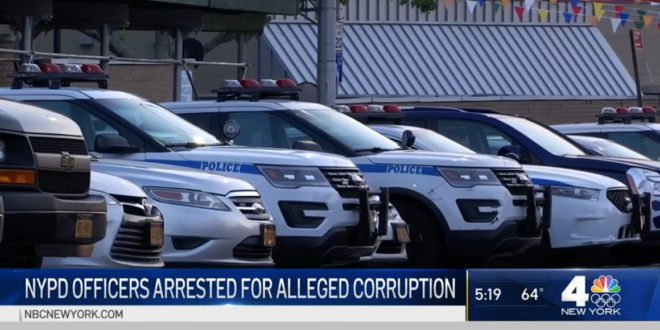 Ex-cop Robert Smith was busted Tuesday along with current NYPD officers Robert Hassett and Heather Busch on charges of collecting thousands of dollars in crooked payoffs for steering cars damaged in wrecks to a specific tow-truck business.

But the allegedly corrupt Smith, in shocking Brooklyn Federal Court documents, was outed as a racist who feds say delivered heroin, spewed hate-filled rhetoric and randomly pointed his gun at Black passersby just to enjoy the look on their faces.

“Bro I point my gun out the window now at n—–s and watch their reaction and drive way,” the then-retired officer allegedly wrote in a text message cited by federal prosecutors. “Hilarious.”

Investigators obtained text messages in which Mr. Smith said he had engaged in shakedowns and took bribes as a police officer, saying, “Bro I robbed everyone.”

In other text messages, Mr. Smith bragged about waving his gun in front of Black residents to scare them, according to prosecutors. Mr. Smith regularly used anti-Black racial slurs and referred to the Ku Klux Klan in his text messages, prosecutors said.

After his retirement, he said that his “real” self would shine, writing in a message: “I even shaved my head. Klan.”

In one recording, ex-NYPD cop Robert Smith described himself as “one of the most corrupt cops in the 105 (Precinct)″ and declared his badge was the only thing sparing him from repeated arrests, according to prosecutors.https://t.co/fEp71e0MwK

Previous Flake: The Greatest Offense For The GOP Is Honesty
Next Kinzinger Zings Matt Gaetz Over “Aging Well” Tweets