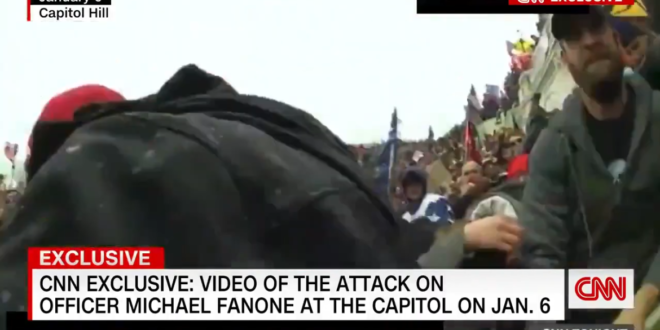 Police officer Michael Fanone suffered a heart attack after being beaten up and dragged down the steps of the U.S. Capitol by the Trumpist mob on Jan. 6. Now, for the first time, it’s possible to see that terrifying assault through the officer’s eyes. CNN has obtained body-camera footage showing the moment that MAGA rioters set upon Fanone, with one gleeful insurrectionist grabbing him and shouting: “I got one!” Fanone can be heard screaming while the crowd descends on him.

Read the full article. At one point in the clip, Fanone pleads for mercy because he has children.

“I’ve got one!” Disturbing new footage from a cop’s bodycam on the Capitol steps on Jan. 6 https://t.co/1HZ16MpuPR

Fanone was stun-gunned several times and beaten with a flagpole. Watch: pic.twitter.com/TaItyUz9IX