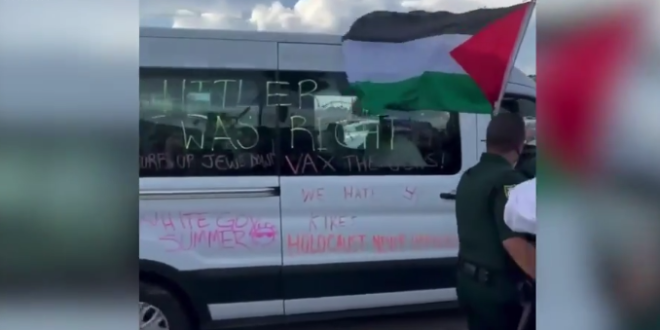 A Miami boat captain and his sister were driving on a street near Coconut Grove on Thursday afternoon when they saw a group of men using markers to scrawl on a van with swastikas and anti-Semitic slurs. Shocked, they turned around to video-record them — and at least six men began raising their arms in the Nazi salute.

“To see actual Nazis gleefully writing on their presumably rented van was just shocking,” Todd Amelung-Wilson said. “They seemed pretty proud of themselves … We were really shaken.”

The men are part of a small virulently anti-Semitic group called the Goyim Defense League, which regularly engages in stunts to harass Jewish people and have been in Florida this month.

Read the full article. The driver of the van was arrested after an “unrelated traffic stop.” The Anti-Defamation League has an extensive entry on the group, which is virulently anti-gay and anti-Muslim. As you can see in the video, they fly a Palestinian flag as part of their trolling.

The men may be part of a small virulently anti-Semitic group called the Goyim Defense League, which regularly engages in stunts to harass Jewish people and have been in Florida this month. https://t.co/vON09Kg2zh

Yesterday, a group of neo-Nazis covered a van in window paint and hurled anti-Semitic hate at a pro-Israel rally in Boca Raton, Florida. The group streamed their stunt to a white supremacist video site. Inside was a hate group that includes ex-Proud Boy “Jovi Val” (Jovanni Valle) https://t.co/BQRv4DQwGo pic.twitter.com/AEuHmg9o0i

If I had hair left, I’d pull it out if I hear of another homophobic, Nazi white supremacist busted in a public park getting a blow job from a trans black person. Meet Jason Brown of the Goyim Defense League of NJ & FL, fired as a jail guard for “performing oral sex on an inmate” pic.twitter.com/E9dh1ARZqP

The Goyim Defense League, a loose network of individuals that espouses virulent antisemitic content, incorporated the Middle East crisis into their two-week “Name the Nose” tour in Florida: pic.twitter.com/JVn4OgRJvd

Neo-Nazi seen heiling Hitler and driving around Miami in van that said "Hitler Was Right," "Jews Killed Jesus" and "Vax the Jews" arrested yesterday for resisting an officer without violence and failure to obey an officer #BecauseMiami https://t.co/kC968RWjw6 pic.twitter.com/Di9HTyIdtb