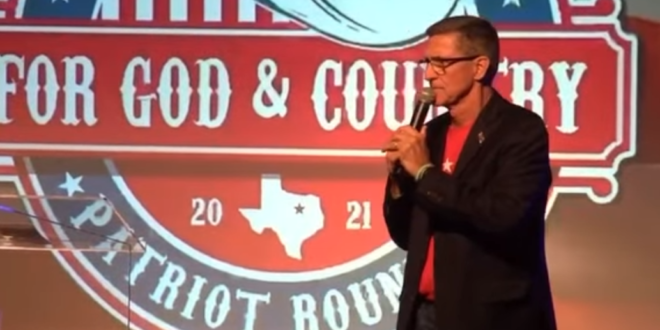 ″I wanna know why what happened in Myanmar can’t happen here?” an unidentified member of the audience asked Flynn, though he pronounced the nation as “Minnimar.” “No reason,” Flynn responded to wild screams of approval. “It should happen.”

On February 1, Myanmar’s military overthrew its democratically elected government and arrested its leaders. The coup immediately sparked protests across the country, prompting the junta to launch a campaign against its own citizens.

Upwards of 800 Burmese people, including at least 40 children, have been killed, according to Myanmar’s Assistance Association for Political Prisoners.

More than 4,000 people have been arrested. Flynn, who has become a prominent figure in the QAnon conspiracy theory, was a main attraction at the event, held at the Omni Hotel in Dallas.

Here is the video of former national security advisor Michael Flynn saying that he thinks a coup like the coup in Myanmar should happen in the US. pic.twitter.com/7mGYjfXg18

~ Michael Flynn says the US should have a coup.
~ Lin Wood talks execution of the ex-US VP.
~ Mike Lindell also called for a military coup.
~ Tip of the iceberg.
~ Is none of this worthy of hard consequences from the authorities?
~ What’s going here? pic.twitter.com/Znxc4k5gnF

Michael Flynn is advocating for a violent coup to overthrow the American government. This is the guy who Donald Trump pardoned for his crimes.

“I recognize that the actions I acknowledged in court today were wrong and, through my faith in God, I am working to set things right…I accept full responsibility for my actions.”

-Michael Flynn,
pleading guilty to lying under oath to the FBI