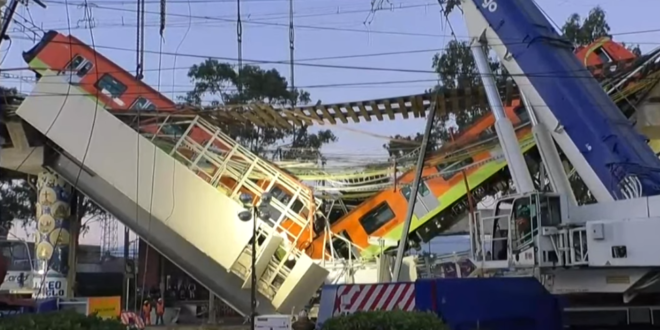 A Mexico City subway train overpass collapsed onto a road on Monday night, killing at least 23 people, including children, authorities said. Dozens more were injured. Photos and video from the scene showed mangled train cars hanging from the crumbled overpass and rescue personnel searching and transporting people away from the scene on stretchers.

“A support beam gave way,” Mexico City Mayor Claudia Sheinbaum said at the scene. She said a beam collapsed just as the train passed over it. The mayor, wearing a hard hat and face mask, told reporters at the site that 65 people have been taken to hospitals, and seven are in serious condition.

The Metro 12 line that runs over the collapsed overpass was built almost a decade ago when Foreign Minister Marcelo Ebrard was mayor of Mexico City. Questions about the quality of the construction emerged soon after he left office as mayor, including accusations of irregularities.

“What happened today with the Metro is a terrible tragedy. My solidarity is with the victims and their families,” Ebrard said on Twitter. “Of course, the causes must be investigated and responsibilities defined.”

Local residents had expressed concern about the structural integrity of the overpass, including cracks in the concrete, after a powerful earthquake devastated parts of the city in September 2017.

Hernando Manon, 42, who lives in the area, was on his way home from work when he saw sparks light up the night sky and the train come crashing down.

He said that he was one of many people who had noticed cracks in the concrete after the earthquake. Although the cracks appeared to have been removed, he said, he did not know the extent of any repairs.