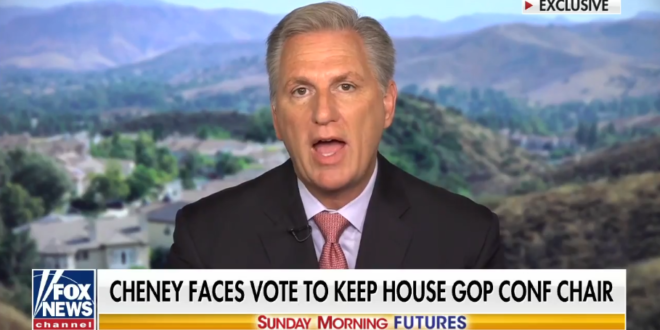 House Minority Leader Kevin McCarthy (Calif.) officially backed Rep. Elise Stefanik (N.Y.) to replace Rep. Liz Cheney (Wyo.) as the Republican conference chair during an appearance on Fox News. “Yes, I do,” he said when asked by host Maria Bartiromo whether he supported Stefanik as the party’s future No. 3 leader in the House.

It is the first time that McCarthy has officially endorsed Stefanik as a replacement for Cheney, though Axios reported last week that the GOP leader had said he had “had it with her” — meaning Cheney — during an off-air conversation with Fox News’s Steve Doocy that was caught on a live microphone.

Previous Kinzinger: The GOP’s The Titanic And Trump Is Trying To “Find Women’s Clothing And Get On The First Lifeboat”
Next NBC Poll: 64% Say Social Media Divides Americans