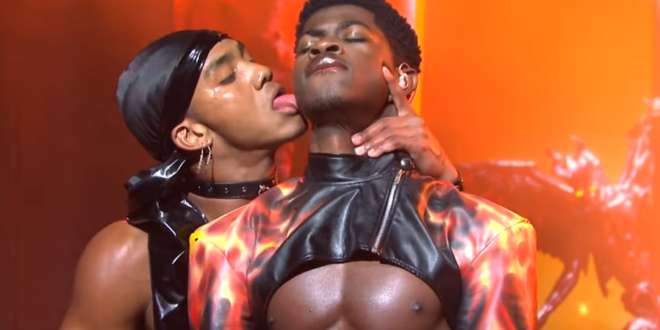 Lil Nas X suffered a wardrobe malfunction while performing on Saturday Night Live. The incident happened during a performance of his controversial song Montero (Call Me By Your Name). During the end of the track the singer, who was dressed in an all-leather outfit featuring a flame design, began dancing on a pole, recreating a scene from the video. As he squatted down the seam of his trousers split. After giving the audience an embarrassed look, he continued the song.

The two-time Grammy winner, 22, triggered homophobic outrage among conservatives with his video for “Montero,” which included Lil Nas X grinding on the devil in a fantastical hell. A limited edition of 666 pairs of “Satan Shoes,” each containing a drop of reportedly donated human blood, were sold as a plug for the video. “Montero” debuted at No. 1 on the Billboard Hot 100 chart last month. The hell-evoking “SNL” performance recreated some of the same elements as the video.

Folks on Twitter are calling the production the gayest thing in SNL history. It was definitely the most authentically gay thing that I can recall. Watch the clip.

NOT MY PANTS RIPPED ON LIVE ON TV

Lil Nas X with his reaction to his pants ripping made the whole performance like 10 times more iconic pic.twitter.com/XKZtBwxST1