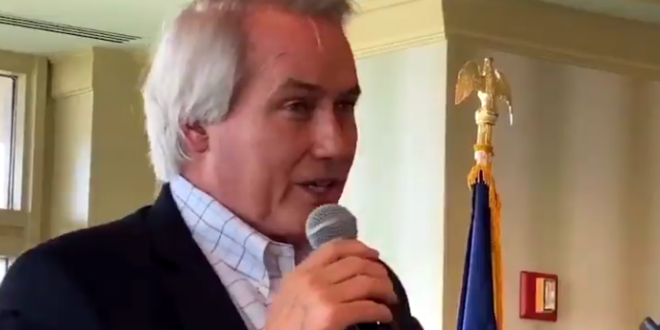 “He won the election. Donald J. Trump is still the guy the military will call for the code if they need a first strike. Joe Biden is not the president of the United States. This is about God. God is getting ready to clean up this world and he’s got a lot of cleaning up to do in America. So we all want Trump to come back, yes, because some things are going to have to happen.”

“My own personal belief is he signed the Insurrection Act. Nobody knows. He’s not going to tell anybody. I think the military is prepared to act if we have a foreign threat or an internal threat that can’t be handled by the police or National Guard. And we’re going to allow what appears to be continuity of government because he’s cleaning things up.” – Kraken lawyer Lin Wood.

Wood is running for chairman of the South Carolina Republican Party and reportedly has a chance of winning. Watch how a woman in the audience reacts.

Lin Wood states that Trump is still the president and that the military would call on him “for the code if they need a first strike.” He also states he believes Trump signed the Insurrection Act in secret. pic.twitter.com/8eA5e1VPER