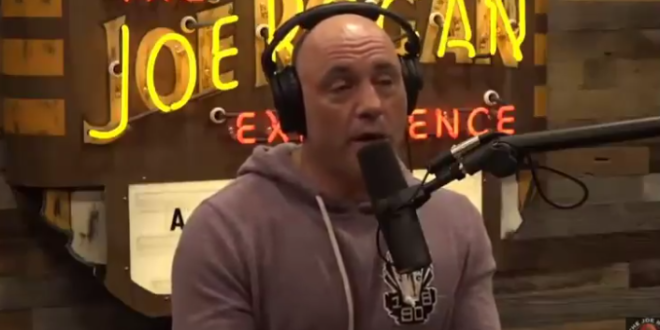 “You can never be woke enough. That’s the problem. It keeps going. And if you get to the point where you capitulate, where you agree to all these demands, it will eventually get to, ‘Straight white men are not allowed to talk.’

“Because it’s your privilege to express yourself where other people of color have been silenced throughout history. I’m not joking. We’ve just got to be nice to each other, man.

When guys like Joe Rogan say they won’t be allowed to speak, what they means is “I’m used to being the oppressor, and I haven’t ever questioned it, so other people getting more rights feels like an attack on me”

Joe Rogan Says Giving Into The Woke Mob Will Result In ‘Straight White Men’ Not Being Allowed To Talk https://t.co/uix71tzyA3

Joe Rogan says “straight white men are not allowed to talk” eventually while complaining on his podcast paid for by a $100,000,000 Spotify contract. pic.twitter.com/CIAl2XGHcD

Joe Rogan complains ‘straight, white men’ will be silenced, not allowed outside due to cancel culturehttps://t.co/1oBYDhjpHy

Can Joe Rogan point to one day in American history where straight white men shut the fuck up?

If you start the clock in 1787 they’ve had roughly 85,500 opportunities to give it a rest for A DAY, and have never ONCE let the goddamn Earth spin without offering an opinion. https://t.co/ZsIwzZnmCT