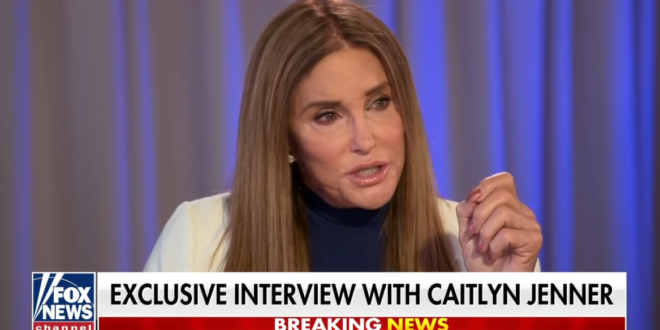 Caitlyn Jenner praised Donald Trump for “disrupting” American politics and said she aims to do the same if she is elected to office in her first major TV interview as a candidate for California governor. The 71-year-old former Olympian and reality TV star, who came out publicly as a trans woman in 2015, spoke with Fox News’ Sean Hannity from her private airplane hangar in Malibu, California.

Though Jenner described her politics during the interview as fiscally conservative and more socially progressive, she cracked down on immigration, saying she would aim to eliminate California’s sanctuary status and supports Trump’s wall.

“We need to spend some money to have a fair and equitable immigration system in this state… I am all for the wall,” Jenner said. “I would secure the wall. We can’t have a state, we can’t have a country without a wall.”

Caitlyn Jenner explains that she’s opposed to transgender girls playing sports against other girls. But then in the next breath she says she wants to be a role model for transgender girls. pic.twitter.com/DwlofpaREO

“You’re pro *legal* immigration” — Sean Hannity puts words in Caitlyn Jenner’s mouth when she talks about immigration. Jenner responds by saying, “sorry, did I miss the legal part? Thanks for catching me. You’ve got my back, Sean, I appreciate that.” #journalism pic.twitter.com/TC6Lj4x060

As crazy as it sounds @Caitlyn_Jenner is the most impressive and relatable candidate for CA Governor I’ve heard from so far. Will discuss next on @FoxFriendsFirst