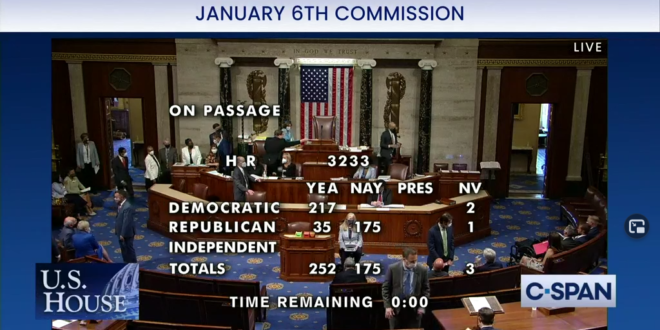 On a vote of 252 to 175, the House voted overwhelmingly to pass the bipartisan Jan. 6 commission. Thirty five Republicans voted against the direction of their leadership, which had strongly urged them to vote no on the measure.

The bill now heads to the Senate, where Democrats would need at least 10 Republican senators to sign on to the legislation.

House Homeland Security Chair Bennie Thompson of Mississippi and the panel’s ranking Republican, Rep. John Katko of New York, announced on Friday they had reached an agreement for the panel that would be modeled after the 9/11 Commission.

Breaking: House passes 1/6 commission by vote of 252-175, with 35 Republicans joining Democrats in supporting the bipartisan plan.

Previous GOP Rep. Greg Pence Votes Against Riot Commission To Investigate Mob That Wanted To Hang His Own Brother
Next CHATTER AWAY: Overnight Open Thread