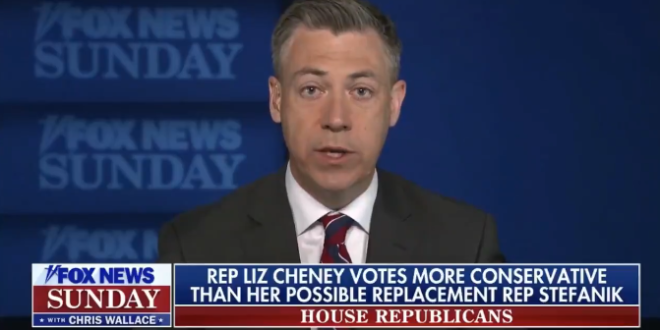 GOP Rep: Speak Against Trump And We Will Oust You

Rep. Jim Banks (R-Ind.) told “Fox News Sunday” host Chris Wallace that Cheney, the House Republican Conference chairwoman, should not have a role in leadership if she continues to call out Trump.

“Republicans are almost completely unified … to oppose the radical Biden agenda,” Banks said, adding that Cheney was acting as a holdout.

“We are almost entirely unified on this issue, except for Liz Cheney,” he said, adding that “any leader who is not focused on that … at this point needs to be replaced.”

Read the full article. Banks was one of the 126 GOP House reps who signed a Supreme Court brief seeking to overturn the election. He later objected to certifying Electoral College results. He was also among the GOP House reps who used COVID as an excuse to make proxy votes when he was actually attending CPAC.

Rep. Jim Banks (R) on Fox News accuses Biden of sending the economy into a “tailspin.” (In reality Biden has presided over more job growth in his first three months than any other president in modern history.) pic.twitter.com/5PCh1G9FLr